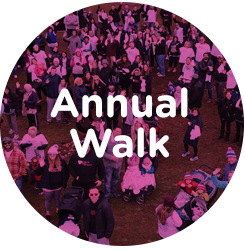 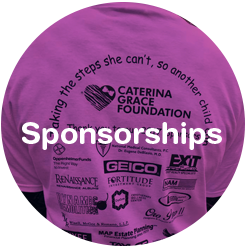 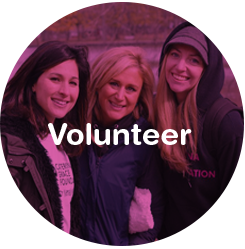 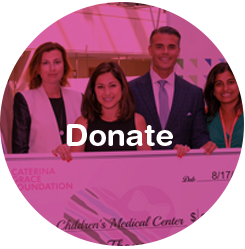 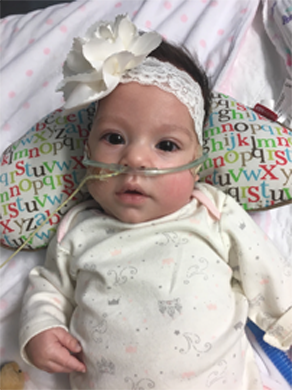 Leah and Anthony Ziniti, who live in Garden City, New York, gave birth to their second child, Caterina, after a full-term pregnancy, with all normal prenatal visits and sonograms until the 8th month, where Leah developed polyhydramnios (excess amniotic fluid). The doctors said the amount of excess fluid was the equivalent of carrying triplets and was indicative of major swallowing difficulty. The hope was that it was something structural that could be fixed through a quick surgery. Leah and Anthony were hopeful everything was OK, but deep down, they knew something was terribly wrong—but nothing could have prepared them for the road ahead.

At birth, Caterina had obvious problems. She immediately required air support in the delivery room, which would never be removed. She was extremely hypotonic (low muscle tone), didn’t cry, couldn’t swallow, or manage her own secretions. 36 days in the Neonatal ICU, 10 doctors, and 20 tests later, Leah and Anthony still had no diagnosis for Caterina. They became all too familiar with the beeping sounds of her machines because of lack of oxygen, when her body turned blue and immediate suctioning was required – a terrifying and vulnerable experience. The machines monitored Caterina’s oxygen saturation levels, heart rate, and breathing rate – which would sound multiple times a day that would signify a problem. The traumatic experience of living so close to death on an everyday basis was excruciatingly painful. However, Leah and Anthony were hopeful because the tone in her proximal muscles had improved. On day 36, it was off to rehab to attempt to get Caterina to swallow and build strength.

At rehab, Caterina’s strength improved ever so slightly in her legs and arms. She swallowed during therapy and intermittently throughout the day. She still turned blue constantly and needed regular suctioning. Leah and Anthony spent every day with her, learning about all her needs and trying to be the best parents under the circumstances. Each day was a routine of therapies – occupational, physical, and speech/feeding. They quickly learned all therapies and reinforced them with Caterina throughout the day. In addition, they also added massage therapy, reading and playtime, and, of course, nap time, as she was a newborn. They did their best to manage their two different world—one with a beautiful, 2-year old son, Dominic, and the other terrifying, fearful and helpless universe they were entrenched in with Caterina, with no diagnosis and no answers.

After six weeks at rehab, she was having significant trouble breathing so the doctors decided to send her back to the same hospital in the Pediatric ICU where they identified an infection. Within 24 hours, she was put on a ventilator since she had very little reserves because she had been fighting every day for two months.

Leah had suspected early on that is was a myopathy (muscle disease) because she fit the description almost to the letter. While intubated, Leah and Anthony pushed for a muscle biopsy. They wanted answers. If this yielded nothing, there was one test left; a genetic test called Whole Exome Sequencing (WES Test).

The muscle biopsy came back with no results. Caterina continued to deteriorate quickly, failing to be extubated. There was only one successful extubation that lasted a few days, but before long, she was back on the ventilator. She progressively deteriorated, and because of her low muscle tone at her core, she couldn’t move mucus at all. This caused her to develop atelectasis in her lungs every day (fluid plugging up her lungs). She continued to require more and more support and was eventually put on paralytics where she was not doing the breathing at all. Leah and Anthony had to make the dreaded decision to remove life support, but still with no diagnosis. A repeat MRI showed some white matter brain disease (which was later revealed to have no significance). They decided to remove support on February 27, 2017, but not before having their blood drawn as well at Caterina’s, in hopes to find some answers through further genetic testing (WES Test). They not only wanted to know what devastating disease ended their daughter’s life but also if either one of them carried a recessive, mutated gene.

On May 10, 2017, almost three months later, they got the call with the results from the WES Test. It was a mutation on the ACTA1 gene which is associated with Nemaline Myopathy. More importantly, it was a de novo mutation which meant it happened spontaneously, and she was the first in the bloodline to have it. Most of the ACTA1 mutations occur de novo¸ or are spontaneous. Almost seven months after her birth, they finally had an answer. It offered closure. It offered comfort. It also offered ease of planning for any other children. Lastly, and most importantly, it helped direct this Foundation. There was a name for it, however rare it was. And, in Caterina’s honor, the Caterina Grace Foundation was established in 2017 by founder Leah Ziniti, to help all patients with Nemaline Myopathy.

A tremendous amount of time, energy and effort went into designing the CGF logo.  We partnered with our friend,  Petros Stambolis for the creation of our logo. At a quick glance, it looks like a heart with a bow in it; however, there is tremendous meaning behind it. The heart symbolizes Leah and Anthony’s everlasting love they had for daughter but, more importantly, the love that she brought to this earthly world. 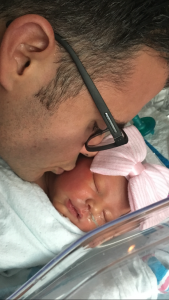 The bow inside the heart is a remembrance of what Leah used to do with her each day. As a mother to her first baby girl, the excitement of cute dresses and outfits needed to be put on hold, since it wasn’t easy getting her dressed and undressed with all the tubes and wires. Instead, Leah would play “dress up” with bows and was easily able to change her hair bows multiple times a day. It symbolized the bond Leah had with Caterina. Lastly, the print within the bow is that of a zebra. The zebra print ribbon is the international symbol for rare diseases and as you will read below, Nemaline Myopathy is extremely rare. Thank you so much Petros for creating something so special that helps illustrates our girl and the foundation we created in the memory of her.

Tuesday morning, February 28th, Leah and Anthony woke up from the toughest day of their lives. The services for Caterina were upon them, but that didn’t scare them. Nothing could be worse than what they endured the past 104 days. They decided to post a notation on social media, disseminating the bad news, and providing information as to where the services were. They included an asterisk at the end with a link that stated, “in lieu of flowers, please donate here.” They wanted this tragedy to help others in any way possible – even though they didn’t exactly know how at the time.

Caterina had a disease that her little body couldn’t overcome. However, each day for 104 days, she showed Leah and Anthony her strength. She fought for them and they cheered her on with each tiny milestone she hit. Every time she learned something new in therapy, she did it better the next time she had treatment. Caterina also fought to be well enough to meet her older brother Dominic, 47 days after her birth, a day that Leah and Anthony will never forget. When Dominic saw his sister, it was pure love at first sight. The few pictures and videos they have of them together will be treasured forever. Due to Caterina’s muscle weakness, it was a real struggle to smile. She fought so hard to smile but when she did a few times, it truly lit up the room – once for her brother, once for Leah’s father, “Poppy Sal,” and a few times for Leah and Anthony. 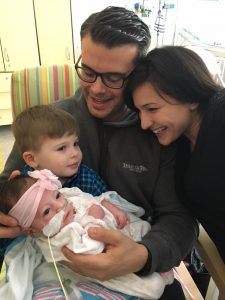 Caterina left a mark on the hearts of the medical teams at Northwell NICU and PICU, as well as St Mary’s Children’s Hospital. The staffs were not only skillful, but compassionate in their care for her. In Caterina’s eulogy, Anthony’s Uncle Leo said it best: “caregivers that began as strangers, ended up caring for Caterina Grace with the love usually reserved for family.” Leah and Anthony will forever be indebted for the care and love she received at these two establishments as well as the heartfelt affection that were shown to Leah, Anthony and the family during the hardest time in their lives.

Dominic turned two shortly after Caterina’s birth, and Leah and Anthony fought hard to ensure he was blissfully unaware of the chaos, and shielded him from their pain and heartbreak with the help of family and friends. The few times he visited with Caterina, it was made as “normal” as possible. He is aware his sister became an angel and lives in heaven now, free from any hurt. Leah and Anthony are thankful he still too young to understand the profound loss of losing a sibling. He talks to her often, and prays to her every night. He will always know the narrative of his sister’s story, but hopefully will not feel the pain of it. The hope is that he grows up to know that despite suffering through a tragedy, with the help of God, you grow through it, and can still bring much love and good into this world. A way to honor your loved one is to be always willing to lend a helping hand. The best medicine, therapy, and healing came from Dominic. He is pure joy and love, and helped make an impossible situation possible. He will grow up knowing God’s grace, love, strength and resilience, but best of all, he was his parent’s saving grace.